What is Cell-free DNA (cfDNA)?

Cell-free DNA (cfDNA) are degraded DNA molecules/fragments that are released into the bloodstream by cells. These fragments, which can vary in length between 50 and 300 base pairs, are no longer confined or encapsulated inside a cell but circulating freely in the bloodstream. 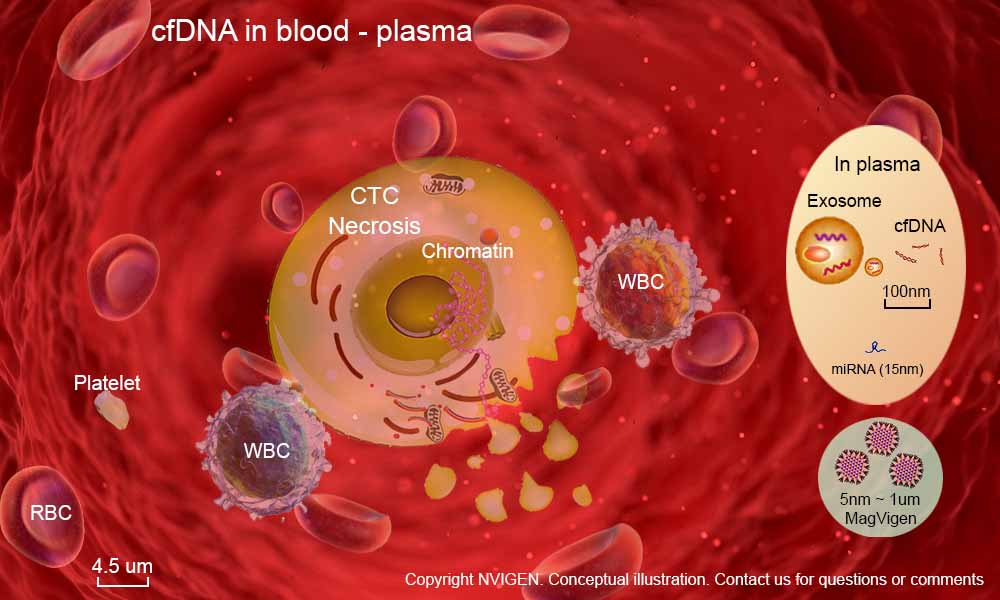 cfDNA circulates in both healthy and pathological conditions, i.e. cfDNA comes from both cancerous and noncancerous cells. In addition to presenting in bloodstream, i.e. in plasma and serum, it also presents in cerebral spinal fluid and saliva. Scientists believe cfDNA is not just passive waste products of cell death but have a physiological and pathological function in inflammation and autoimmunity.

As researchers Diana Han etc. summarized, nucleases act both in cfDNA generation via cell death pathways and in cfDNA clearance at the plasma level. Nuclease-associated cfDNA markers, such as its size, genome coverage, end positions, and end motifs, differ in different tissues and pathologies and can be harnessed for molecular diagnostics.

cfDNA has been successfully exploited as noninvasive biomarkers for biopsies. For example:

What is Circulating tumor cells (CTC)?

CTCs are tumor cells shed into the bloodstream from primary and metastatic tumor deposits. CTCs occur at very low concentrations of one tumor cell in the background of millions of blood cells. What mechanisms causing CTCs to break off from the tumor are elusive, thus it is unclear whether CTCs represent the entire makeup of cancer cells in the tumor or only a subpopulation. Nonetheless, analysis of CTCs in peripheral blood of cancer patients holds great promise for the early detection of invasive cancer and the management of advanced disease.

When cfDNA is released by cancer cells, it is specifically called circulating tumor DNA (ctDNA). ctDNA carries genomic and epigenomic alterations concordant to the tumor mutational spectrum. It’s a specific biomarker that can provide personalized information to detect residual disease or monitor tumor progression during therapy.

Why is CTC and ctDNA so important?

Normally, the cell-free DNA fragments are cleaned up by macrophages but in cases of cancer it is believed that the overproduction of cells leaves more ctDNA behind. For example, studies have reported that the concentration of cfDNA in serum or plasma of hepatocellular carcinoma patients to be 3-4 times higher than patients with chronic hepatitis and nearly 20 times that of healthy controls. ctDNA has the potential to accurately genotype the tumor and identify personalized genetic and epigenetic alterations of the entire tumor. Studies have suggested that the variability of ctDNA levels in cancer patients can reflect tumor burden, stage, vascularity, cellular turnover, and response to therapy. Thus ctDNA can guide potential therapeutic targets, while also being able to monitor minimal residual disease, reducing the need for harmful adjuvant chemotherapy and allowing more rapid detection of relapse.

The origin of cfDNA and ctDNA

The mechanisms of cfDNA release from cells, and ctDNA from tumor cells, fall into two categories: cell death and active cell secretion. Cell dealth includes processes such as apoptosis, necrosis and NETosis.

Apoptosis is the process of programmed cell death. This includes:

For example, the cells between the fingers of a developing embryo.

For example, blood cells will go into apoptosis after 120 days. It makes way for nice, new young cells.

The average adult human loses between 50 and 70 billion cells each day due to apoptosis. For an average human child between eight and fourteen years old, approximately twenty to thirty billion cells die per day. Since most cfDNA fragments are measured between 180 and 200 base pairs (bp), which falls within the size range of a mononucleosome, apoptosis has been postulated for many years to be the primary source of circulating cfDNA.

Apoptosis plays an important role in preventing cancer. If for some reason apoptosis can’t happen, it can lead to uncontrolled cell division and the subsequent development of a tumor. On the other hand, too much apoptosis, i.e. when cells die when they’re not supposed to die, causes a number of so-called neurodegenerative diseases, e.g. Parkinson’s disease, Huntington’s disease, Alzheimer’s disease and Lou Gehrig’s disease, with which, in a certain part of the lower part of the brain, the cells get messages from some place, most of which we don’t understand, to tell them to die.

When apoptosis happens, there’s a whole scripted choreography of pathways and proteins within a cell that get activated in a concerted action to kill the cell without making a mess. The prcoess includes chromatin condensation, membrane blebbing, nucleus collapse. There are at least two stages of DNA fragmentation in apoptosis: an initial cleavage of DNA into high molecular weight 50-300 kb fragments, followed by cleavage of DNA into oligonucleosomally sized DNA that are multiples of 180 bp. Finally, fragmented DNA are packaged along with other degraded cell components into apoptotic bodies (1-5 μm in diameter) and microparticles (0.1-1 μm in diameter) and released.

The second origin is necrosis, which is a spontaneous and unregulated form of cell death in an organ or tissue. Necrosis can have various causes, which can lead to different types of damage to tissues:

Necrosis can be treated, with the dead tissue removed, but the affected tissue can not be healed or returned to good health. It generates larger DNA fragments due to an incomplete and random digestion of genomic DNA.

Neutrophils are a type of white blood cell (leukocytes) that act as your immune system’s first line of defense. They constitute 50% to 60% of the total circulating white blood cells. In the blood, neutrophils are inactive but are swept along at high speed. When they receive signals from the sites of inflammation, they slow down and leave the blood to the tissues, where they are activated by cytokines and arrive at the battle scene ready to kill. Activated neutrophils eject neutrophil extracellular traps (NETs), webs of chromatin and mtDNA coated with antimicrobial proteins, to immobilize and neutralize pathogens. In the process of such NETs release, Neutrophils die. This cell death process is called NETosis.

A proportion of cfDNA may be produced as part of the innate immune response in NETosis. Here is an illustration for Putative stimuli and steps in NETosis.

Live cells spontaneously release newly synthesized DNA as part of a homeostatically regulated system. Stimulation of lymphocytes also results in the release of large amounts of cell-free DNA in the absence of cell death. Active secretion of cfDNA may serve a physiological role. It has been shown that cfDNA secreted in exosomes may serve to maintain tissue homeostasis by removing damaged DNA.

The clearance mechanisms of cfDNA

It is unknown whether other factors such as circadian rhythms, inflammation, or particular therapies affect ctDNA release and clearance. There are at least three potential contributing mechanisms:

One study of intravenous injection of radiolabeled mononucleosomes into mice showed that the liver was a major organ for removing circulating nucleosomes, with 70-90% of the injected dose recovered in the liver, and ~3% in the spleen and ~4% in the kidneys, with trace amounts in the heart and lungs.

What is cell-free DNA (cfDNA) extraction?

cfDNA extraction is the removal of cfDNA fragments from proteins and other cellular components in a biological sample by using physical and/or chemical methods, e.g. organic extraction, Chelex extraction, and solid phase extraction.

cfDNA extraction is important because it is the starting point for the following processes such as PCR or NGS for all the applications above and because it’s challenging to extract due to the following reasons:

Isolation, quantification and evaluation of cfDNA is not a straightforward task. It requires a sensitive and reliable workflow.

And cfDNA is an extremely difficult sample type to work with because cfDNA is often limited in yield and highly fragmented. This is where MagVigen™ cfDNA Extraction Kit (Cat #K61003) comes into play. It can provide higher yield and higher quality of cfDNA samples for NGS assays (vs. Qiagen Kit).

Please refer to the K61003 Product Sheet for detailed steps.

How can we help?

The quality of cfDNA sample will strongly influence the downstream applications, which makes it a critical step in library preparation.

The studies discussed above and many other studies strongly support the necessity of continuous improvement and refinement of cfDNA extraction and DNA fragment size selection to enhance the understanding of this important type of circulating biomarkers, and better develop ctDNA clinical testing assays for cancer treatment monitoring and guidance or earlier detection.

Customized product and assay development requests can be addressed at info@nvigen.com, e.g. to increase the potential applications of cfDNA and ctDNA for discovery research of tumor biology, clinical diagnostics, earlier cancer detection and targeted cancer therapy.